Esperanto was relatively late in reaching the market town of Burley in Lancashire, but there was a functioning Esperanto society there for some 80 years..

Here are the names of two Burnley pioneers found in the Adresaro in 1906:

According to the Enciklopedio Harold Pilling (1888 – 1957) learned Esperanto in the town in 1908. J. Morgan Whiteman was made a Fellow of the British Esperanto Association in June 1907, and Walter B.Currie received the same honour in November 1908. Walter Currie (born in 1872), Scottish by origin, was a businessman who chaired the Burnley Esperanto Society from 1908. He wrote a weekly Esperanto article for the Burnley Gazette. He taught the language in several technical schools, and translated a number of works into Esperanto.

An article in the Burnley Gazette on Wednesday 2 February 1910 reported on local activities in and about the language.

If anyone had doubts as to the vitality of the International language in Burnley and the vicinity, those doubts would surely have been dispelled if the doubter had taken apeep into the Heasandford Council achool on Saturday evening. The occasion was thefourth annual concert and dance promoted bythe Burnley Group of Esperantists. In spite of the extreme inclemency of the evening, nearly 200 persons gathered, including "samideanoj" (like minded persons from Nelson., Rishton,. Great Harwood, Clowbridge, Rawtenstall and other places in the district. The central hall of the school presented avery bright and animated appearance, and dancing to the strains of Mr Howarth's band, occupied a good share of the evening, being evidently vastly enjoyed. Not all the people present were Esperantists, but it: is; quite safe to say that those who were not, wished they were, and heartily envied the older members the branch the facility with which they used the new international tongue. It was delightful to hear the courteous demand "Ĉu vi dancos, frauiino?" and: the cordial reply "Dankon, sinjoro. " ; and away the couple glided over the well-polished floor, as happily and with as complete and mutual understanding as if the engagement had been made in the most conventional English. It made one think what a unique and charming experience it must beto attend one of the International Congresses of the Esperantists, meeting on the common ground of common language, people of a score or more nationalities, each speaking mother-tongue to all the rest, but means of the "Kara lingvo" (the dear language) perfectly comprehending each other and thus realising the truth of Burns' prophecy that men and women the world o'er shall "brithers be a' that." One of the features of the evening was a room set apart for the display of Esperanto literature and postcards - mostly picture postcards received from the foreign correspondents of members  of the Burnley group. They were from all nationalities under the sun from China to Peru and formed a very attractive side-show. As to the literature stall, we wish some of those who are sceptic as to the usefulness and universality of the Esperanto movement could have inspected it. It would surely have shaken the complacent and somewhat supercilious notions so many cultured and really well-intentioned people entertain with regard to the position and prospects of Esperanto. The dancing was pleasantly varied recitation (in English) by Miss Crewe, a song. " Coming thro' the rye,' very tastefully sung in Esperanto Miss Poppleton, ventriloquial sketch Mr. Whittam, which the gentleman automaton occasionally lapsed into Esperanto; and some natural international language of music, discoursed piano and violin by Miss and Master Woods, two tiny but sturdy atoms of humanity, whose efforts were truly predigous for their tender years. The president of the Burnley Group, Mr. W. B. Currie, who is Fellow of the British Esperanto Association, offered a few words welcome, the firstl part being English and the concluding passages in Esperanto. He referred to the growth of the movement throughout the world, of its aim,—to promote international amity and goodwill by enabling different peoples to understand each other better. He refeired with strong condemnation to the recent utterances of Bishop Welldon, at Nelson, on the subject of Esperanto; and with regret the recent decision of the Burnley Education Committee to discontinue Esperanto as a subject in the curriculum of the Burnley Technical School. He urged these present who had not already become Esperanto students to join one of the several classes which are now being held various parts oftown, and invited any interested persons to visit the rooms of the Burnley group in Hargreaves-street, which are open every evening. The proceedings were well organised by the committee under tbe guidanceance of the able secretary, Mr. Louis Hartley, and with courteous assistance of the M.C.'s, Messrs. W. B. Currie and J. Harrison. 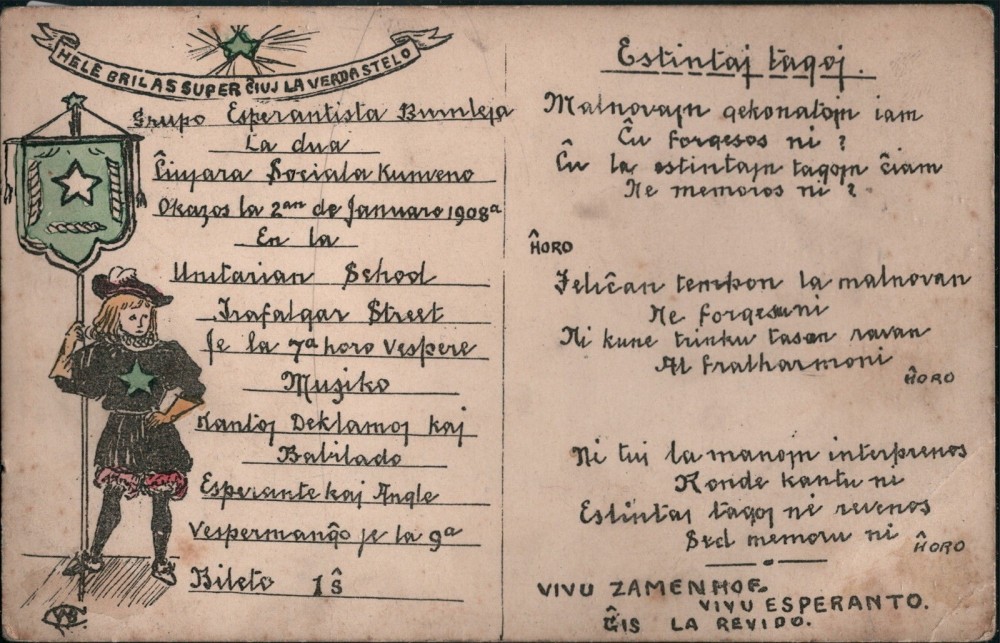 Very few written records have survived from an Esperanto speaking group which was so lively before the First World War. Have any minute books resisted the ravages of time?