An introduction to a Sheffield-based leading light of the Esperanto-speaking community in its first decades.

John Merchant was born in Sheffield in 1872. spent almost all his life there and died in the town in 1936. Re was a practical idealist. John Merchant left school at the age of twelve and through his diligence he rose to become managing director of Adams Polish. A man of tremendous energy and wide interests, he was, at various times, Council number of the YMCA, a member of Sheffield Chamber of Commerce, Chairman of Sheffield Reform Club, Treasurer of Sheffield Wednesday Cricket Club, Chairman of the Yorkshire Esperanto Federation from 1921, and Chairman oi the British Esperanto Association from 1922. From 1928 to 1931 he held office in the international body for the promotion of Esperanto.

He was not just a committee man. As a creative writer, he possessed a lively and simple style. He wrote two slim books in Esperanto: ‘Tri Angloj Alilande', about the adventures of three innocent Englishmen travelling abroad, and 'Kompatinda Klem‘ , an amusing story which was published in 1931. These original works can still be found on eBay from time to time. He also wrote ‘Jozefo Rhodes kaj la fruaj tagoj de Esperanto en Anglujo’, a good introduction to the early history of the language in the United Kingdom (1923). 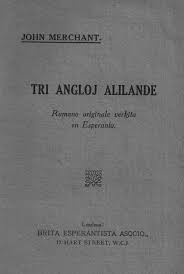 Merchant found tine to be a sportsman, playing both cricket and football. He was also a contributor to Sheffield and other newspapers, particularly on sporting topics. Some press cuttings and typescripts of his journalistic work can be consulted at Sheffield Library.

It was in 1903 that John Merchant learned Esperanto - by means of a textbook in French. He is listed as Esperantist number 8290 in Dr Zamenhof‘s listing of adepts of the new tongue.  It is strange to see his address (43 Cliffe Field Road, Meersbrook) nestling close to addresses in Yokohama, Moscow, Monte Carlo and Prague! He became e tireless traveller, giving talks on the planned language all over the country and contributing thoughtful pieces to a score of Esperanto journals all over the world.

John Merchant‘s contribution to the Progress of Esperanto was marked by his diligence and energy. He worked unstintingly for Esperanto in his beloved home-town and on the world stage.

Acknowledgements: I am grateful to Donald Merchant for much information. Mrs. G.F. Cartledge of Sheffield has in her possession the early minute book of the Sheffield Esperanto Society. I am grateful for her help in putting together a picture of a remarkable man.