The Early Years of Esperanto in Bradford

Bradford in West Yorkshire rose to prominence in the 19th century as an international centre of textile manufacture.  Like many major cities Bradford has been a destination for immigrants, and people, particularkly in the export businesses, became aware of the challenges of the diversity of language. It was fertile ground for the young Esperanto movement.

The names and addresses of 18 early speakers of Esperanto in Bradford, with their registration numbers are found scattered throughout the Adresaro de Esperantistoj (collection of addresses of Esperantists) between January 1904 (Edition XXV) and January 1909 (Edition XXIX).  All of the following are listed in Bradford, Anglujo, i.e. England. There may be a duplicate entry.

René Pacros was born in 1882 in Thiers, France, and 1901 he was boarding at the address given in the list. He is described as a wool dyer’s clerk. Daniel Priestley was born in 1867 in Bradford. In 1901 he was a railway clerk. Ten years later he was working for the goods department of a railway. George H. Overton (1881-1944) was an oil merchant’s book keeper, working for his father an oil merchant. Clearly those interested in the language, although spread over Bradford  and surrounding area, came together from time to time. According to an inside cover of The British Esperantist magazine for 1908 an Esperanto Society in Bradford had been founded in May 1906. Its secretary is named as J.T. Holmes, 29 Norman Drive, Eccleshill, and its President in 1908 was Robert Whitaker. In 1913 the secretary was J.A. Calvert of 115, Legram’s Lane. It was J.T. Holmes who wrote to Dr Zamenhof in 1909 offering him the title of Honorary Prsident of the Esperanto Society in Bradford. Zamenhof accepted, but within a couple of years he would no longer accept such titles. Holmes wrote to Zamenhof to ask about the day when Esperanto was first published. Zamenhof’s reply was that the appearance of the Unua Libro was “ĉirkaŭ” (around) 21 July. 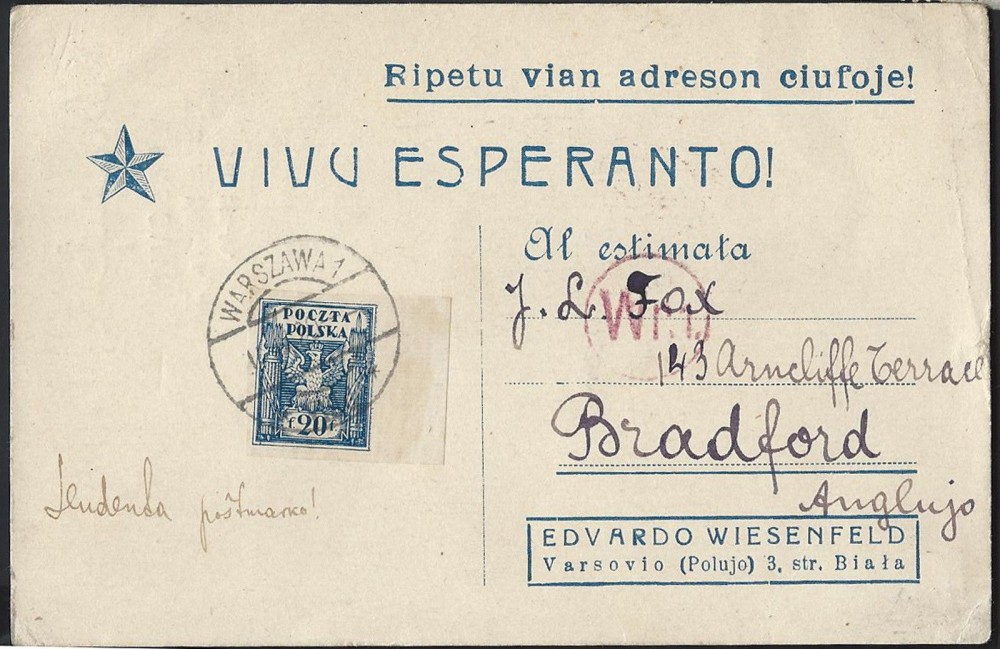