Here are some snippets about the early years of Esperanto in Accrington, a small Lancashire town.

Only three registered speakers of Esperanto can be found in Accrington,  former centre of the Lancashire cotton and textile machinery industries:

Samuel Kirkbright, komercisto (businessman) attended the Esperanto Congress in Antwerp in 1911. He was still an officer of the local Esperanto group in 1917.

In October 2012, while browsing on eBay, I was surprised to come across an unrecorded message by Dr Zamenhof listed for sale.  Addressed to a Mr Edwin Roberts, secretary of the Accrington Esperanto Society in Lancashire, the postcard is clearly written in Zamenhof’s spidery script. It is undated but, but the postmark makes it clear it was posted in August 1912.  See the attached images. Wondering about the source of this card and other Esperanto books listed, I contacted the vendor, who kindly replied:

“I acquired them a few weeks ago at a local shop that deals in house clearances and bric-a-brac. … I bought quite a lot; they were not expensive. When looking through the books when I got home I realised that they had belonged to the president of the Accrington Esperanto branch, Mr H.E Roberts. There were little notes and a few postcards tucked in between the pages; this is where I found the L.L.Zamenhof postcard.”

Dr Zamenhof’s postcard is not earth-shattering. He writes to thank the Esperantists in Accrington, turning down the invitation to him to become their Honorary President. He wrote many such cards turning down such titles.  It is all too clear what had happened. Descendants of Mr H.E. (probably Edwin) Roberts had kept the books safely, until the next generation wanted to sell the house, and they called in a contractor to clear everything out. We know anecdotally of the loss of many documents following the death of an Esperanto pioneer, when the house or flat of an changes hands.

The Esperanto Society in Accrington was founded in 1909. J.D. Applebaum in his “A short history of the Lancashire and Cheshire Esperanto Federation 1908-1933” published in 1933, records that the founder was a dentist called Lee. A Miss Lizzie Iddon became a Fellow of the British Esperanto Association in January of that year. She was listed as secretary, and S. Kirkbright was listed as chairman in January 1911. By August of that year it was meeting daily. Lizzie Iddon, originally from Accrington and later of Southport, won an ‘eisteddfod’ competition for original writing in Esperanto in 1914.

The invitation to Zamenhof dates from the time of this expansion. Sadly, I have been unable to trace the minute books and other records of that society, and I wonder whether they have survived. 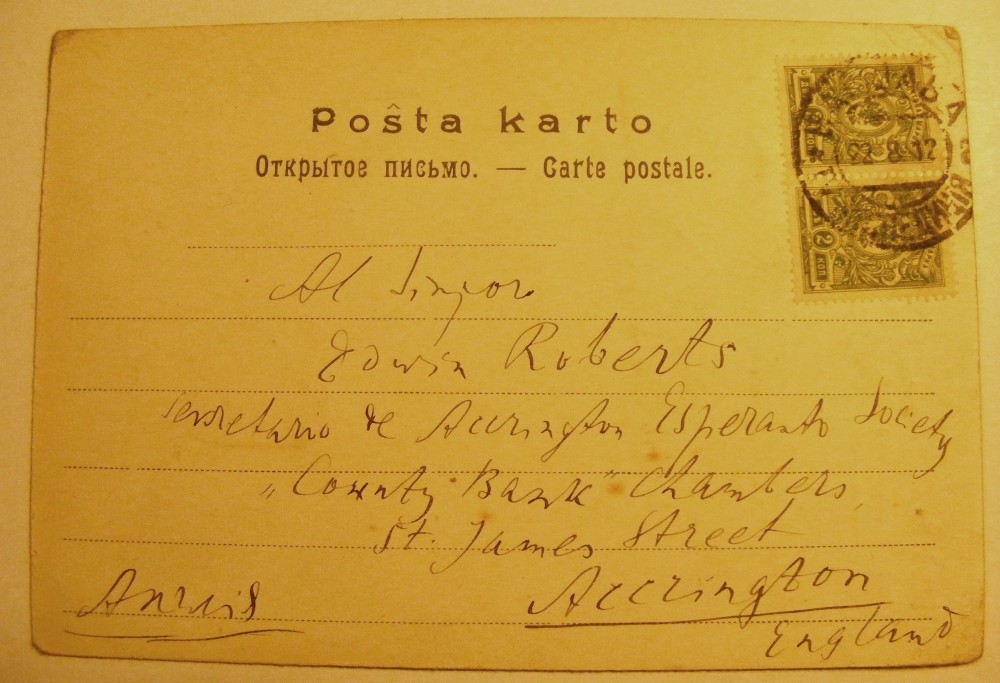 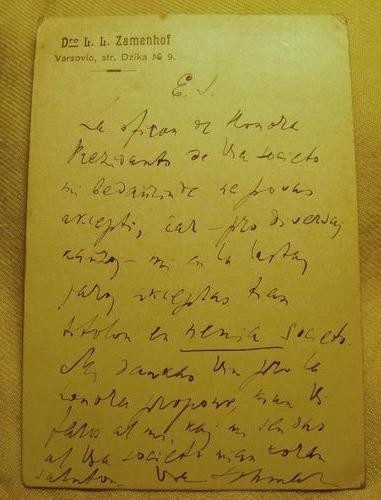