Occasionally one comes across critics of Esperanto who suggest that the language can only be used in conferences arranged for that purpose. In fact most of my use of Esperanto on my travels over the years has been in private settings away from conference centres and the like. I am not against structured meetings, but I have a lot of experience of, for example, sleeping on the floor of a farmhouse in Croatia or having coffee and cakes in the garden of a German family.

During 2019, I was lucky enough to visit Japan twice. In January, I went alone to discuss with the city council in Himeji practical aspects of the twinning of "our" castle in Conwy with their castle. In October I travelled there again, this time with my wife Pat and four colleagues to sign an agreement between these two noble castles, both recognized by UNESCO as being important to World Heritage.

During my first visit I used English for two days, with the help of an interpreter, and subsequently only Esperanto for five days. I had the pleasure of meeting friendly Esperantists. I was invited to lecture about Wales twice - first in Himeji, then in Kobe. These good-natured people spent a lot of time with me, explaining a lot to me, especially about Japanese food and religious practices. Local Esperantists guided me on an excursion to Nara, the former capital of Japan. I also visited Kobe where I was present at the start of a murder trial. I understood what was happening, thanks to Nakamiti Tamihiro who was sitting next to me, whispering translations. Then he sent me the verdict of the judge in that case.

Mrs Yosida Nobuko taught me the Japanese tea ceremony with patience. It's dangerous to mention names, because people can easily be left out, but I am happy to thank Tada Ryuji and Tukamoto Takesi who did so much for me in Himeji and Isogai Naotake in Kobe. Takatoshi Somekawa was kind enough to accompany me to the airport on my last day. 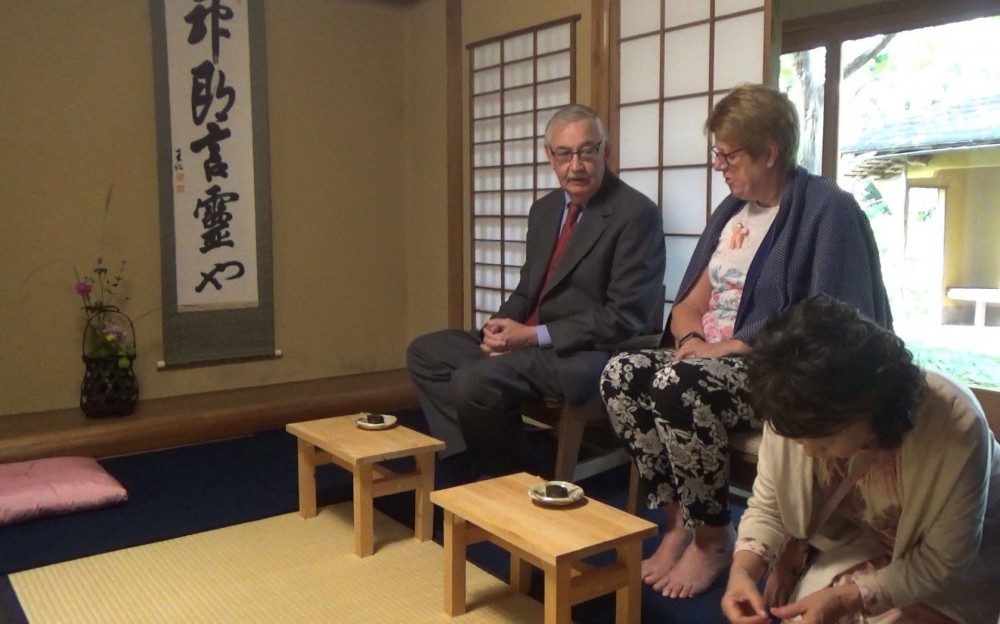 Before the tea ceremony.

A few months after my return home I went to see a doctor about an unusual back pain. Finally, a serious illness was diagnosed. Due to the uncertainty, I contacted my Japanese friends to explain that my planned return in October 2019 had become really uncertain.

A little later I received a package from Japan with greetings from members of the Harima Esperanto Society, based in Himeji. Knowing that I was not in good health, they sent me an unusual and touching gift. Senbazuru is a group of thousand origami paper cranes joined together by string. An ancient Japanese legend promises that whoever folds a thousand origami cranes will receive a gift from the gods (if I understand correctly). In Japan, the crane was considered a mystical animal believed to live for a thousand years. Because of this, it has become a symbol of good luck and long life. The Esperantists in Himeji worked together in making this multi-coloured symbol of their good wishes.

Finally, with the permission of my oncologist (needed, so that I could get insurance), I decided that I would be able to visit Japan again in October 2019 to attend the formal signing of the agreement for the twinning of the castles. My wife and I made the trip to Japan, and again local Esperantists welcomed us and made every effort to make us feel at home. 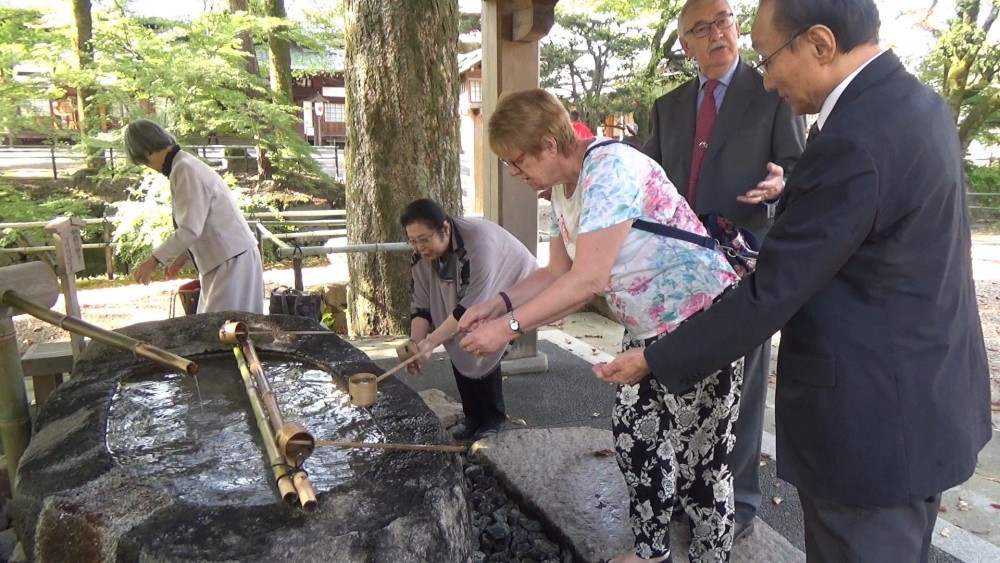 Probably the most striking part of our stay in Japan was a visit to the Oomoto Centre. By bus  23 Esperantists from the area around Himeji travelled to Kameoka together. On the way, we visited the most sumptuous, most luxurious toilets I have ever seen. I have never previously seen chandeliers in public toilets near a motorway! 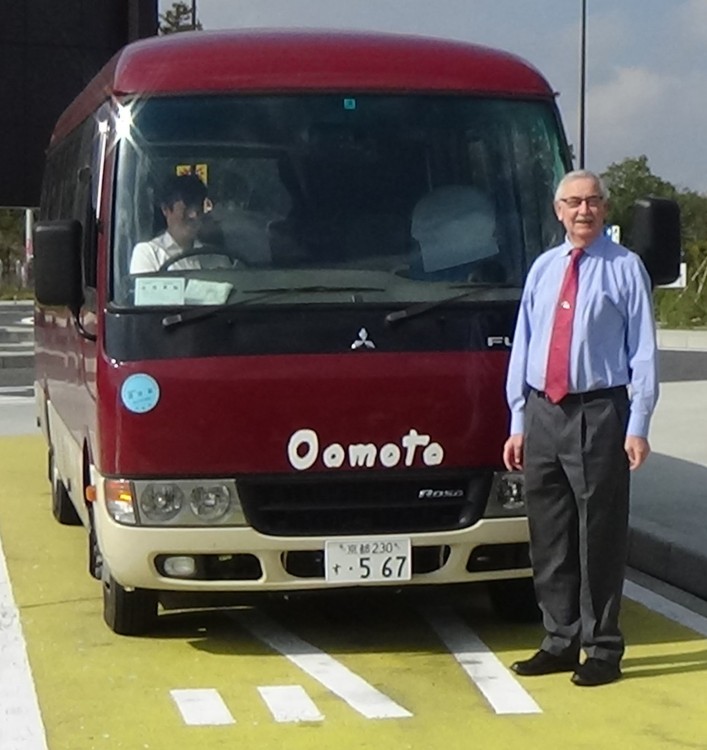 Arriving at the Oomoto building, we met a young woman called Unika, a board member of the youth organisation TEJO from Korea, and a young Spanish man called Alejandro. There we were able to attend a ceremony of a religion or sect that originates from Shinto, but emphasizes that there is only one God. I thank Toshiomi Okuwaki for responding to my questions. We also watched a Noh drama. This is the oldest Japanese form of theatre combining music, dance, and acting. Little "happens" in Noh drama, and the overall effect is of a metaphor. Informed and educated Japanese spectators know the story's plot very well, so what they appreciate are the symbols and subtle allusions to Japanese cultural history contained in the words and movements. Well, Pat and I certainly couldn't understand the whole thing, but I could appreciate the unusual music and the graceful dancing. 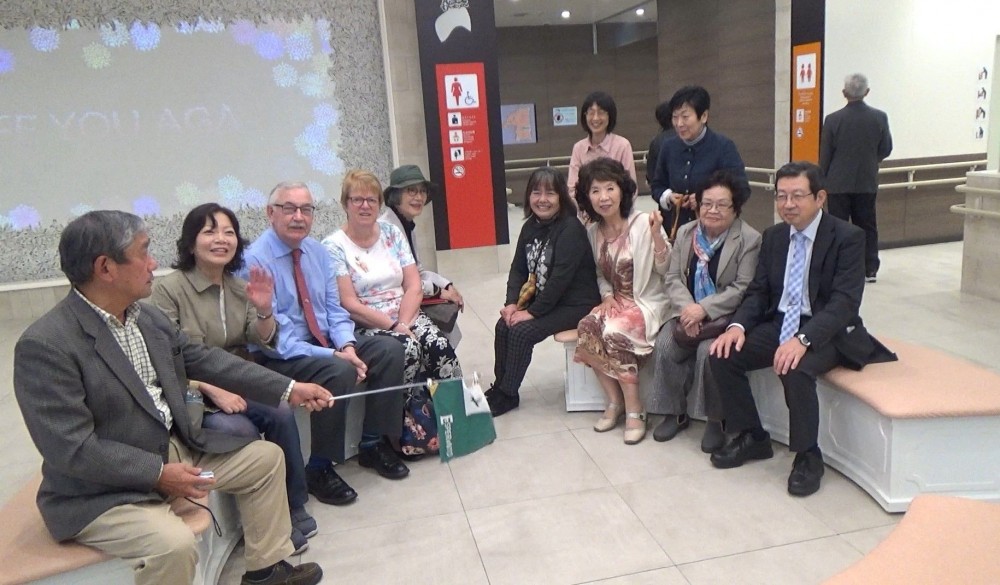 With friends, outside some luxurious toilets!

Esperanto has definitely helped me get to know a country with culture and traditions that were completely new to me.