Richard Geoghegan and other pioneers of Esperanto in Birkenhead

Birkenhead lies on the Wirral Peninsula, along the west bank of the River Mersey, opposite the city of Liverpool. Zamenhof’s new planned language reached the town in 1889.

The names and addresses of eight early speakers of Esperanto in Birkenhead are found scattered throughout the Adresaro de Esperantistoj (directory of Esperantists) between 1889 and 1908. The following are listed in Anglujo, i.e. England. Here are the names of those Birkenhead pioneers of over a century ago:

Not much is known to me about many of those listed, although some are to be found in post office directories.

Listed with him, and presumably recruited by him, is Richard Geoghegan’s mother B.G. (Bessie Gertrude) Geoghegan of Birkenhead.

Richard Henry Geoghegan  (1866 –1943) was born and brought up in Birkenhead. The Dictionary of Irish Biography suggests that he was also known as ‘Harry’.

The English Wikipedia tells us that “In the Unua Adresaro, the earliest directory of supporters of Esperanto, Richard Geoghegan appears as number 264.”  It goes on to call him, under a photo, “first Esperantist in the English-speaking world”. The Esperanto Vikipedio makes a more cautious claim, calling him “ŝajne la unua angle parolanta esperantisto” (apparently the first English-speaking Esperantist).

The booklet called, in full, Adresaro de la personoj kiuj ellernis la Lingvon « Esperanto », serio 1, 1889, does indeed list the first thousand learners, but it does not ascribe numbers to them, nor is there any indication that these names are listed in order of registration; indeed they are in alphabetical order. Giving his new address in Tacoma, Washington seven years later, Geoghegan gives himself the number 264 - see “Novaj Esperantistoj” Serio XVI, 1896, but numbers were not published for the first thousand. 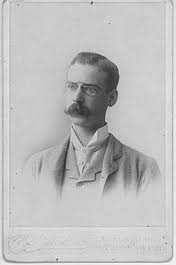 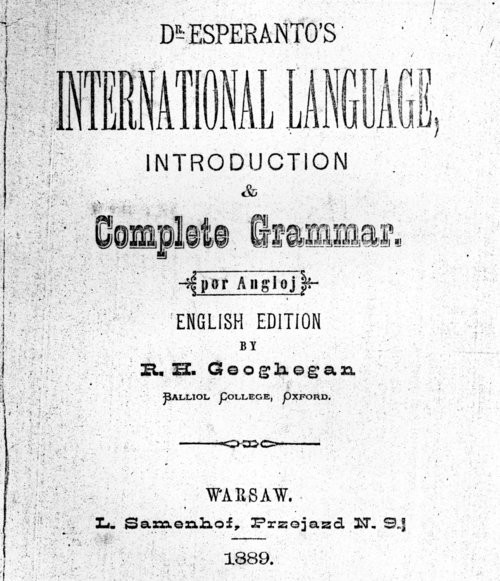 Richard Geoghegan suffered a fall at home as a small child, as a result of which he was crippled for life, walking with difficulty and often with the help of crutches or a cane. From an early age he displayed extraordinarily great abilities, especially in the learning of languages – perhaps as a compensation for his inability to be physically active.

Despite his education being disrupted by medical treatment – we know from the 1881 Census that on census night he was at the Sanatorium for Children in North Meols, Lancashire – around the age of 17, he became interested in oriental writing systems and entered the University of Oxford, in January 1884, to study Chinese. There he showed himself to be an outstanding student, twice receiving scholarship awards, but he did not obtain a degree because at Oxford, there was no degree in Chinese until 1936.

In the autumn of 1887, when the language Esperanto had just appeared, according to Richardson (Shamrocks on the Tanana, 2009) it was not Geoghegan himself but his friend Walter J. Crawhill, who read about the new international language and immediately wrote to Dr L.L. Zamenhof in Latin. Geoghegan was able to use the German edition of the Unua Libro (First Book) which  Zamenhof sent. Having learned the language from this booklet, a while later Geoghegan received from Zamenhof the first copies of the same booklet in an English translation by a Warsaw enthusiast. Geoghegan warned Zamenhof that this translation was a poor one, probably not by a native speaker, and it would bring Esperanto into disrepute in the English-speaking world. As a result, Zamenhof asked Geoghegan to produce a more suitable translation himself, which he did. The original faulty translation was withdrawn, and in 1889 Geoghegan's version was published, tasking the place of the earlier version.  This modest booklet had an impact in the English-speaking world, making Zamenhof’s new language accessible by people who had no previous background in language learning.

Although Richard Geoghegan presented himself as an Irishman, and his father was an Irish Protestant, his mother was certainly English, and he was born in Birkenhead, lived briefly in Kent and went to secondary school in Pudsey, near Leeds, then to Oxford University.  In this respect Geoghegan’s life paralleled that of Saunders Lewis (1893 - 1985), born John Saunders Lewis in nearby Wallasey. After an English education, Lewis went on to be a Welsh poet, dramatist, historian, literary critic, and a prominent Welsh nationalist and a founder of the Welsh National Party (later known as Plaid Cymru).

The Geoghegans (Gertrude with sons Richard and John, known as Jack, and two daughters), emigrated from Liverpool to Washington State, USA in April 1891, settling in Eastsound. Here, while working as a secretary / stenographer, Geoghegan became a founder of and a leading light in the Washington State Philological Society. It was in North America in the 1890s that Geoghegan spoke Esperanto for the first time. Until then the language had been a written one only for him. The first person he spoke to in the language was a German called Wilhelm Trompeter.

Geoghegan moved to Alaska to act as Stenographer to an ambitious lawyer and politician, and it was here that he died on October 27, 1943. He had married a woman of black or of mixed-race descent in secret in 1916. This son of Birkenhead remains virtually unknown today, but he was a man who overcame a handicap to make a useful contribution to linguistics, and to Esperanto in particular.